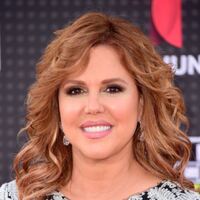 Maria Celeste Net Worth and Salary: Maria Celeste is a Puerto Rican investigative journalist, actress and television host who has a net worth of $25 million. She is probably best known as the host and producer of Spanish language news program Al Rojo Vivo. At its peak the show aired in 15 countries and was watched by 35 million people every day. Maria was let go by Telemundo in August 2020.

Maria Celeste Arrarás (better known as Maria Celeste) was born September 27, 1960 in Mayagüez, Puerto Rico.  As a youth, she competed internationally in swimming. In 1971, she won three medals (a gold, a silver and a bronze) at the Central American and Caribbean Swimming Championships. She had hopes of competing at the 1976 Summer Olympics in Montreal, Quebec, Canada, but contracted mononucleosis after sharing a glass of water with someone. At age 18, she represented Mayagüez in 1979 at the Miss Puerto Rico pageant where she placed 1st runner. At age 20, she started at Loyola University of New Orleans in New Orleans, Louisiana, where she eventually majored in communications and public relations.

Maria began her broadcasting career at Puerto Rican television station Canal 24 (Channel 24) as a reporter. In 1986, she was hired by the New York Telemundo affiliate WNJU as a reporter and her work there drew the attention of the executives of the Univision network, who hired her in 1994 as the co-anchor of their Miami, Florida-based television news program, Primer Impacto. In 2006, she became the first Telemundo hostess to co-host the Today Show on NBC. In 2003 and 2006, Maria Celeste served as a judge for the Miss Universe pageant. Over the years, Maria Celeste has interviewed many presidents and other people of note, including Yolanda Saldívar, the woman convicted of murdering Tejano music singer Selena Quintanilla-Pérez. In 2007, she wrote the children's book The Magic Cane, published in Spanish as El Bastón Mágico and two years later she published the book Make Your Life Prime Time: How to Have It All Without Losing Your Soul, published in Spanish as Vive Tu Vida Al Rojo Vivo: Secretos Para Triunfar En Todo.