Korina Sanchez net worth: Korina Sanchez is a Filipina broadcast journalist, radio anchor, magazine show host, and newspaper columnist who has a net worth of $5 million. Korina Sanchez was born in Victoria, British Hong Kong in October 1964. Sanchez is currently the Chief Correspondent for the Integrated News and Current Affairs Division at ABS-CBN Corporation, cable channel ANC, and radio station DZMM.

Sanchez received a Bachelor's degree at Miriam College. Her career started out as an editorial assistant at 19. She became an hourly newsbreak announcer and a primetime news weather girl. Sanchez has appeared on many ABS-CBN television programs including Magandang Umaga, Magandang Umaga Po, Options, Hoy Gising!, Balitang K, Isyu 101, Morning Girls with Kris and Korina, Harapan, Bandila, Rated K, and TV Patrol. She has written for the Manila Times, The Philippine Star, People Asia Magazine, and more. Sanchez has won numerous awards for her work on TV, radio, and print. 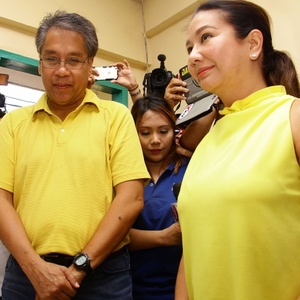