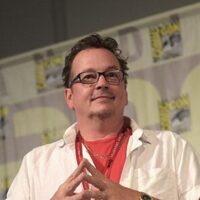 Kevin Eastman net worth: Kevin Eastman is an American comic book artist and writer who has a net worth of $20 million. Kevin Eastman was born in Springvale, Maine in May 1962. He is best known as the co-creator of the Teenage Mutant Ninja Turtles. Kevin and Peter Laird self-published a black and white issue of a comic Teenage Mutant Ninja Turtles in 1984. The pair made a four page press kit and sent it to many TV and radio stations. This led to press coverage of the TMNT and Mirage Studios which they also created. The second Turtles comic had an advanced order of 15,000 copies. The duo was invited to the Atlanta Fantasy Fair in 1984. Laird bought out Eastman's rights in 2008 and then sold the franchise to Viacom/Nickelodeon in 2009. Kevin started with the series again as a writer and artist and worked on the 2014 Teenage Mutant Ninja Turtles film series. He also made a cameo as a doctor in the film. Kevin is credited with writing the Teenage Mutant Ninja Turtles TV series which aired from 1988 to 1996, 2003 to 2006, and 2012 to 2013, as well as the TMNT movies and video games. Eastman published the magazine Heavy Metal in 1992 and serves as the magazine's editor and publisher.