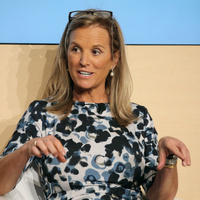 Kerry Kennedy net worth: Kerry Kennedy is an American writer and Human Rights activist who has a net worth of $10 million dollars. Born in Boston, Massachusetts on September 8, 1959, Kennedy attended Brown University as well as Boston College Law School. She is a known Democrat and has led Human Rights efforts in countries such as El Salvador, Kenya, Haiti, Gaza, South Korea, North Ireland, and more. Her life is dedicated to maintaining basic human rights and law. She is a Roman Catholic and has written a book called Being Catholic Now, Prominent Americans Talk About Change in the Church and the Quest for Meaning. She was formerly married to Andrew Cuomo and has three daughters by the names of Cara, Mariah, and Michaela. She has also been known to work for children's rights, child labor, sexual assault, domestic violence, and more.