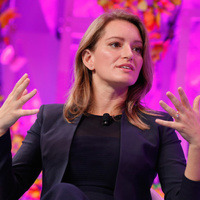 Katy Tur net worth and salary: Katy Tur is an American author and broadcast journalist who has a net worth of $4 million. Katy Tur was born in Los Angeles, California in October 1983. She graduated from the University of California, Santa Barbara and then worked for regional stations including KTLA, News 12 Brooklyn, WIPX-TV, and Fox 5 New York. Tur became a storm chaser with the VORTEX2 team for The Weather Channel. She joined New York City's local NBC station WNBC-TV in 2009 before joining the national NBC News. She was embedded with Donald Trump's presidential campaign which resulted in her book Unbelievable: My Front-Row Seat to the Craziest Campaign in American History in 2017. Part of Tur's duties included informing Trump's campaign about the infamous Access Hollywood tape. In 2017 she won the Walter Cronkite Award for Excellence in Journalism. Katy dated Keith Olbermann from 2006 to 2009 and married Tony Dokoupil of CBS News in 2017.

Katie's father is Robert Tur, who is now known as Zoey Tur after a undergoing a male to female transition. Zoey is arguably the most famous helicopter pilot journalist of all time. In the 90s when she identified as Robert, she operated a helicopter above Los Angeles and was able to film some of the most notable moments of the 20th century. She was responsible for filming the Reginald Denny beating during the LA riots, damage from the Loma Prieta earthquake and more. But perhaps most famously, Zoeywas the first reporter to locate OJ Simpson's Bronco on June 17, 1994 which kicked off the most famous car case of all time. Zoey followed OJ throughout the chase and filmed some of the most commercially valuable footage. Tur owns all the footage she shot and has successfully licensed it many times over the last few decades.