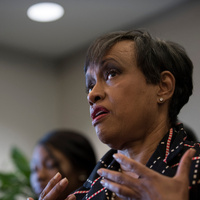 Judge Glenda Hatchett net worth and salary: Judge Glenda Hatchett is a judge, author, and reality television personality who has a net worth of $5 million dollars. Born in Atlanta, Georgia, Glenda Hatchett graduated from Mount Holyoke College with a degree in Political Science, and then went on to earn her law degree from Emory University School of Law. She began working at Delta Air Lines as both Senior Attorney and Manager of Public Relations. After many successful years with Delta, she became Chief Presiding Judge of the Fulton County, Georgia Juvenile Court. She was the first African-American female Chief Presiding Judge of a state court ever. She starred on the reality television program, "Judge Hatchett" for nine seasons. The show was nominated for two Emmy Awards. She is the author of the best-selling book, "Say What You Mean, Mean What You Say" and "Dare to Take Charge". She currently serves on the Boys and Girls Clubs of America National Board of Governors and on the board of the Atlanta Falcons Football Organization.