Jon Krakauer Net Worth: Jon Krakauer is an American writer and mountaineer, primarily known for his book "Into Thin Air" who has a net worth of $35 million dollars. Jon Krakauer was born on April 12, 1954 in Brookline, Massachusetts and when he was two, his family moved to Corvallis, Oregon where he was a member of the tennis team at Corvallis High School and graduated in 1972. He went on to study at Hampshire College in Massachusetts, and in 1976 he received his degree in Environmental Studies. One year after graduating from college, he spent three weeks by himself in the wilderness of the Stikine Icecap region of Alaska where he climbed a new route on the Devils Thumb an experience he described in "Eiger Dreams" and in his book "Into the Wild". Also in 1977, he met former climber Linda Mariam Moore and they married in 1980. Krakauer's most famous climb was a guided ascent of Mount Everest that became known as the 1996 Mount Everest disaster. Soon after summiting the peak, Krakauer's team met with disaster as four of his teammates perished while making their descent in the middle of a storm. He turned his recollection of this event into the acclaimed book "Into Thin Air". He has also written the books "Under the Banner of Heaven" and "Where Men Win Glory: The Odyssey of Pat Tillman", as well as numerous magazine articles. 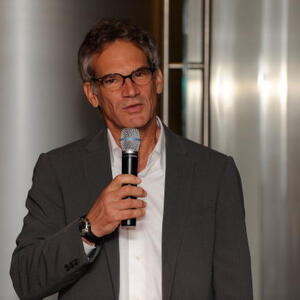