John Glenn net worth: John Glenn was an American former aviator, engineer, astronaut, and United States senator who had a net worth of $5 million. John Glenn was born in Cambridge, Ohio in July 1921. Glenn was part of the "Mercury seven" group of military test pilots who were selected by NASA in 1959 to become America's first astronauts.

He flew the Friendship 7 mission in 1962 and became the first American to orbit the Earth and the fifth person in space. He received the Congressional Space Medal of Honor in 1979 and in 1990 was inducted into the U.S. Astronaut Hall of Fame. He is the last surviving member of the "Mercury seven". After resigning from NASA in 1964 Glenn ran for a U.S. Senate seat from Ohio. He served as the U.S. Senator from Ohio from 1974 to 1999. Glenn also served as Chairman of the Senate Committee on Governmental Affairs from 1987 to 1995 and is a member of the Democratic party. He graduated from Muskingum University in 1962 and enlisted in the U.S. Army Corps in 1942. He was not called to duty so he enlisted as a United States Navy aviation cadet. He transferred to the U.S. Marine Corps and became a Colonel who received many awards such as the Presidential Medal of Freedom. John Glenn died on December 8, 2016 at the age of 95. 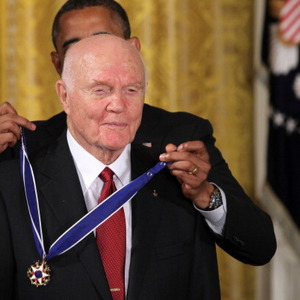