Jimmy Swaggart net worth and salary: Jimmy Swaggart is an American Pentecostal pastor, author and televangelist who has a net worth of $10 million. Swaggart's television ministry began in 1975 and his ministry continues to air throughout the United States and around the world.

At the peak of his power in 1987, Jimmy Swaggart World Ministries and its Bible college generated $150 million in revenue, more than $500,000 per work day. Of that $150 million, $135 million came from individual contributions from his TV ministry. At that time, more than twenty of Swaggart's direct family members were employed by the church in various capacities. The church had annual payroll of $11.5 million to 1200 employees.

Sexual scandals involving prostitutes in the late 1980s and early 1990s led to the Assemblies of God removing Swaggart's rights to exercise the functions associated with being a spiritual leader, and also caused him to temporarily step down as the head of Jimmy Swaggart Ministries. Today, he continues to rebuild from the scandal. His Jimmy Swaggart Telecast and his Study in the Word programs are broadcast through the US on 78 channels and in 104 countries. His ministry is also broadcast over the Internet. Swaggart's ministry is now considered to be non-affiliated, non-denominational, and is significantly smaller than it was in the pre-scandal years.

Swaggart was born on March 15, 1935 in Ferriday, Louisiana. He is the cousin of Rock 'n' Roll great, Jerry Lee Lewis, and country music star, Mickey Gilley. He married Frances Anderson in 1952 and the couple had a son, Donnie, in 1954. According to his autobiography, Swaggart, along with his son and wife, lived in poverty during the 1950s as he preached throughout rural Louisiana. Being too poor to own a home, the Swaggarts lived in church basements, pastors' homes, and small motels. In the 1960's Swaggart began recording gospel music albums and transmitting them on Christian radio stations. In 1975, seeing that television offered the ability to reach a larger audience, he switched to television ministry and by 1983 more than 250 television stations were broadcasting Swaggart's telecast. In tandem with his televangelism, Swaggart has written about 20 Christian books that are offered through his ministry and also publishes a monthly magazine called, The Evangelist. Swaggart's wife, Frances, also hosts a television program called Frances and Friends that is shown on SBN and his son, Donnie, preaches at churches across the country. 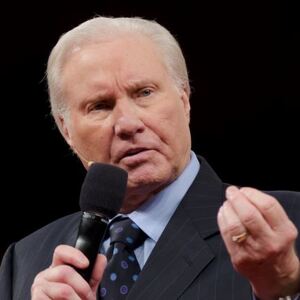