Jeremy Schaap net worth: Jeremy Schaap is an American sportswriter, television reporter, and author who has a net worth of $700 thousand. Jeremy Schaap was born in New York in August 1969. He is the son of the late broadcaster and journalist Dick Schaap. Jeremy Schaap graduated from Cornell University and was an editor at The Cornell Daily Sun.

He has won eight Emmy Awards including the Dick Schaap Award for Outstanding Writing. Schaap is best known for working on the ESPN television series SportsCenter, Outside the Lines, and E:60. He is also a regular contributor to the TV series ABC World News Tonight and Nightline. Schaap has been published in ESPN The Magazine, Sports Illustrated, The Wall Street Journal, Parade, Time, and The New York Times. He has authored the books Cinderella Man: James J. Braddock, Max Baer, and the Greatest Upset in Boxing History and Triumph: The Untold Story of Jesse Owens and Hitler's Olympics. 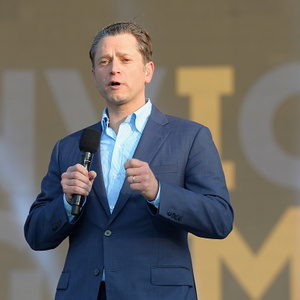