How much is Jen Arnold Worth?

Jen Arnold net worth: Jen Arnold is an American neonatologist and reality television star who has a net worth of $3.5 million dollars. Jen Arnold is based in Houston, Texas, where she works at the Texas Children's Hospital. She is the wife of Bill Klein, the owner of a New York-based telecommunications business. The couple starred in the TLC series, "The Little Couple" from 2009 to 2016 and returned in 2017. Born with spondylo-epiphyseal dysplasia, Jen Arnold stands just 3'2″ tall. The series followed the couple as they live and work, negotiating the challenges of being under four feet tall. The program began as a one-off special called, "Little People: Just Married", and soon after Season 1 began airing in March of 2009. The show chronicled the birth of their children, as well as multiple family vacations. Recently, while Arnold and her husband made final arrangements to get their new daughter, Zoey, home from India, Arnold experienced bleeding and was later diagnosed with a rare cancer that grew from her pregnancy loss. She went through months of intensive chemotherapy treatments and is now in remission. The couple said that the cancer diagnosis was not something they expected nor foresaw, but unfortunately they had to deal with it. They chose to share the cancer diagnosis because it was part of their lives, but Arnold stated, "I do not want my cancer diagnosis to overshadow in any way the adoption of our daughter." The show airs on the television network, TLC. The Little Couple has also appeared on episodes of the TV series The Oprah Winfrey Show, The Dr. Oz Show, The Wendy Williams Show, Extreme Makeover: Home Edition, and more. 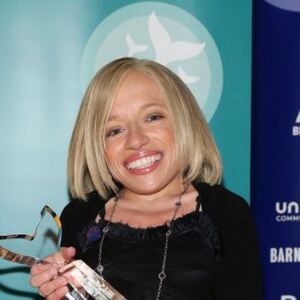