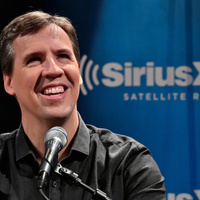 Jeff Kinney Net Worth: Jeff Kinney is an American game designer, cartoonist, producer, actor and children's book author who has a net worth of $70 million. Born on born February 19, 1971, in Fort Washington, Maryland, US, Jeff Kinney spent most of his childhood in Washington, D.C., eventually moving to New England in 1995. It was at the University of Maryland that he created a popular comic strip called "lgdoof" in the campus newspaper and realized that he wanted to be a newspaper strip cartoonist. Meanwhile, he got an idea for a children's book called Diary of a Wimpy Kid, which was released in 2007 becoming a New York Times bestseller. Three years later, the book was turned into a movie starring Zach Gordon as Greg Heffley. Working full-time as a writer and online games designer, he created the kid-meant website Poptropica, where the Diary of a Wimpy Kid characters and events are featured in the two islands of Poptropica universe. It is known and visited by children around the world. The writer who lists Judy Blume, Beverly Cleary, Piers Anthony, and J.R.R. Tolkien as his inspiration, was named one of the 20 Artists & Entertainers in The TIME 100 (the mag's list of The World's Most Influential people) in 2009. Nowadays, Jeff resides in Plainville, Massachusetts, with his wife and their two sons. Between June 2016 and June 2017, Jeff Kinney earned $21 million. He has sold more than 150 million books worldwide and continues to sell millions more every year. The book was turned into a movie in 2010 that went on to earn more than $75 million in the US alone.