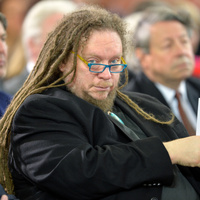 Jaron Lanier net worth: Jaron Lanier is an American writer, scientist, and composer who has a net worth of $5 million. Jaron Lanier was born in New York, New York, and grew up in Mesilla, New Mexico. He began attending New Mexico State University when he was thirteen years old, and went on to graduate level study, and earned grants to study mathematical notation and computer programming. After driving to Los Angeles to visit a friend, he ended up working for Atari, then launched his own business, VPL, Research. VPL Research focused on virtual reality technology. The company ultimately went under in 1990. From there, he went on to work as the Chief Scientist of Advanced Network and Services of Internet2, as well as serving as the Lead Scientist of the National Tele-immersion Initiative. He was also a visiting artist and scholar at multiple academic institutions. He also collects and plays rare instruments. He has released an album, and composed the soundtrack for the film, "The Third Wave".