Jaime Bayly net worth: Jaime Bayly is a Peruvian writer, journalist, and television personality who has a net worth of $8 million. Jaime Bayly was born in Lima, Peru in February 1965. He has authored the novels Don't Tell Anyone, It Was Yesterday, I Don't Remember It, The Last Days of La Prensa, The Night Is Virgin, I Love My Mommy, There Is No Poetry Here, My Brother's Wife, The Hurricane Has Your Name, Suddenly, An Angel, The Sentimental Jerk, The Crippled and the Crazy, You Will Die Tomorrow: Writer Sets Out to Kill, You Will Die Tomorrow: The Mystery of Alma Rossi, Volume 2, You Will Die Tomorrow: They'll Spit on my Grave, Volume 3, The Rain of Time, El nino terrible y la escitora maldita, and Pencho frio. 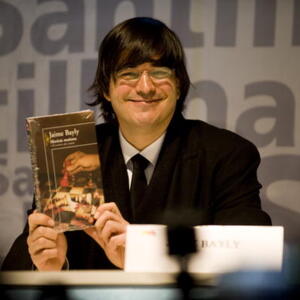