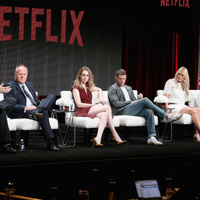 J. Michael Straczynski net worth: J. Michael Straczynski is an American writer and producer who has a net worth of $6 million. J. Michael Straczynski was born in Paterson, New Jersey in July 1954. He works in television, film, novels, short stories, radio dramas, and comic books among other media. Straczynski created the science fiction TV series Babylon 5 and its spin-off Crusade and wrote 92 out of the 110 episodes of Babylon 5. He also wrote the four Babylon 5 television movies. Straczynski wrote for the Marvel comic book series The Amazing Spider-Man from 2001 to 2007. He is known for interacting with fans through online forums and is known as the first TV producer or "showrunner" to directly interact with fans on the Internet. Straczynski graduated from San Diego State University where he wrote for the student newspaper. He has also written for the TV series He-Man and the Masters of the Universe, She-Ra: Princess of Power, Jayce and the Wheeled Warriors, Captain Power and the Soldiers of the Future, The Twilight Zone, The Real Ghostbusters, Jake and the Fatman, and Murder, She Wrote. Straczynski has also written for the movies Thor, Underworld: Awakening, and World War Z. He was nominated for a BAFTA Film Award for Best Screenplay for Changeling in 2009. Straczynski also authored The Complete Book of Scriptwriting.