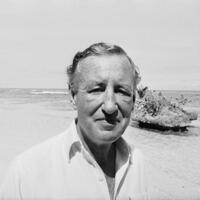 Ian Fleming net worth: Ian Fleming was an English author, journalist, and naval intelligence officer who had a net worth equal to $100 million at the time of his death in 1964 (adjusting for inflation). Ian Fleming was born in Green Street, Mayfair, London, United Kingdom in May 1908 and passed away in August 1964. He is best known for authoring the James Bond series of novels. He came from a wealthy family and was connected to the Robert Fleming & Co. merchant bank. He worked for Britain's Naval Intelligence Division during World War II and planned Operation Goldeneye and his career provided inspiration and background for his Bond novels. He authored his first James Bond novel Casino Royale in 1952. The series ranks among the best selling series of fictional books in history with more than 100 million copies sold. He also authored the children's story Chitty-Chitty-Bang-Bang. His Bond series has been translated to film 26 times and the title character has been played by seven actors. Fleming was married to Ann Charteris who was previously married to Viscount Rothermere. Ian Fleming passed away on August 12, 1964 at 56 years old from heart disease from a lifetime of heavy smoking and drinking.