What was Hunter S. Thompson's Net Worth?

Hunter S. Thompson was an American journalist and author who had a net worth of $5 million at the time of his death. Hunter S. Thompson was best known for founding the gonzo journalism movement and penning the popular novel "Fear and Loathing in Las Vegas." He also wrote the influential "Hell's Angels," and contributed articles to numerous publications. An avid user of alcohol and illegal narcotics, Thompson killed himself at the age of 67 following mental health issues.

Hunter Stockton Thompson was born on July 18, 1937 in Louisville, Kentucky as the first of three sons of Virginia, a librarian, and Jack, a public insurance adjuster. When he was 14, his father passed away. For his schooling, Thompson went to I.N. Bloom Elementary School, where he co-founded the Hawks Athletic Club. He went on to attend Highland Middle School, Atherton High School, and Louisville Male High School. In 1952, Thompson became a member of the Athenaeum Literary Association, a school-sponsored club dating back to 1862. As a member, he contributed articles to the club's yearbook, The Spectator. However, in 1955, Thompson was expelled from the group after serving as an accessory to a robbery. Moreover, he spent 31 days in prison for his crime.

Following his release from prison, Thompson joined the United States Air Force. Stationed at Elgin Air Force Base in Florida, he took night classes at Florida State University. Thompson also got his first professional writing job during this time as a sports editor for the Command Courier. In 1958, he received an honorable discharge as an airman first class.

After departing the Air Force, Thompson served as sports editor for a newspaper in Pennsylvania. He subsequently relocated to New York City, where he audited classes at Columbia University. A little later, Thompson worked as a reporter for the Middletown Daily Record. In 1960, he moved to San Juan, Puerto Rico to work for the sports magazine El Sportivo; however, the publication ceased operations shortly after his arrival. In light of this, Thompson became a stringer for the New York Herald Tribune and a handful of other papers focused on the Caribbean. He then returned to the United States, and hitchhiked along US Highway 40 to Big Sur. There, Thompson worked as a security guard and caretaker at Slates Hot Springs.

In the early 60s, Thompson wrote the novels "Prince Jellyfish" and "The Rum Diary"; the former was unpublished, while the latter wasn't published until 1998. Thompson traveled to South America in 1962 to work as a correspondent for the National Observer. Additionally, he worked as a reporter for the Brazil Herald. Upon his return to the United States, Thompson settled in California, and eventually ended up in San Francisco. There, he became heavily involved in the burgeoning hippie movement, and started writing for the underground Berkeley paper Spider. 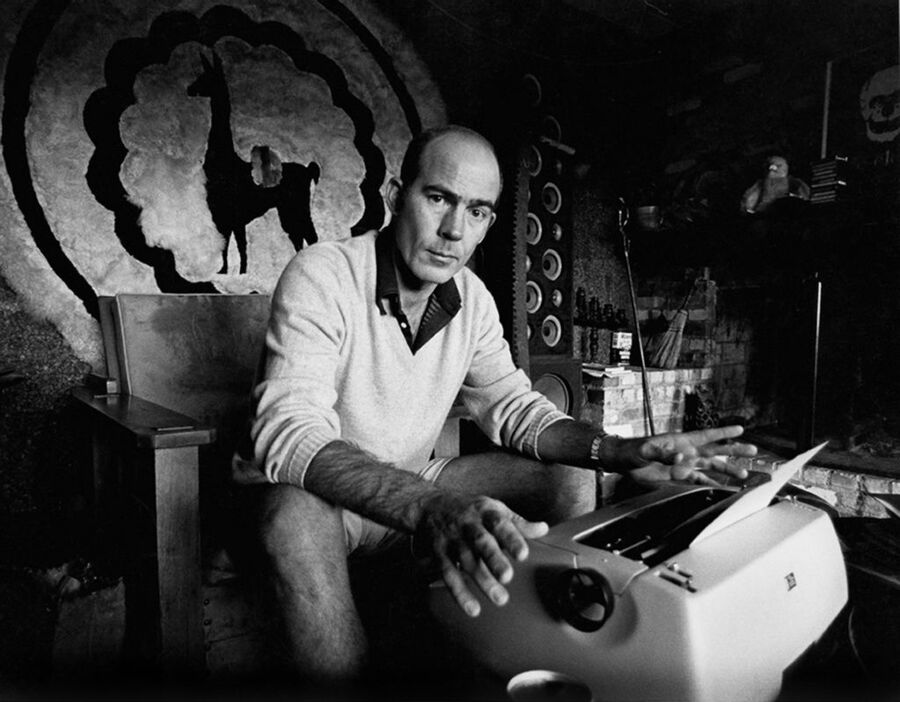 In 1965, Thompson was hired by the Nation editor Carey McWilliams to pen a story about the Hells Angels motorcycle club. His article, which appeared in the paper that May, brought him many book offers. Thompson ultimately turned down the offers to spend his time living and riding with the Angels. However, the relationship eventually fell apart when the Angels felt that they were being exploited for Thompson's personal gain. A full-length book, entitled "Hell's Angels: The Strange and Terrible Saga of the Outlaw Motorcycle Gangs," came from this experience, and was released in 1966. Highly acclaimed by critics, the book launched Thompson to fame. Following this success, he sold articles to a number of national magazines, including Esquire and Harper's.

Gonzo Journalism and "Fear and Loathing in Las Vegas"

In 1970, Thompson wrote an article for the magazine Scanlan's Monthly entitled "The Kentucky Derby is Decadent and Depraved." Accompanied by illustrations from Ralph Steadman, the article is credited with birthing the gonzo journalism movement, which is characterized by energetic, often outrageous first-person accounts in which the reporter is an active participant in the story they're telling. Thompson expanded upon this mode of storytelling with his 1971 novel "Fear and Loathing in Las Vegas," a roman à clef focused on a journalist named Raoul Duke who travels to Las Vegas with lawyer Dr. Gonzo to cover a narcotics officers' convention. On the road, they get sidetracked by a bevy of drugs. Hugely acclaimed, "Fear and Loathing in Las Vegas" became Thompson's best known work, and spawned two film adaptations.

Starting in late 1971, Thompson wrote extensively for Rolling Stone magazine on the presidential election campaigns of Richard Nixon and George McGovern. His articles were soon combined and published as "Fear and Loathing on the Campaign Trail '72." Following a bungled assignment during the end of the Vietnam War, Thompson's journalism career steeply declined. From the late 70s on, most of his output appeared as a four-volume book series called "The Gonzo Papers." However, Thompson did write some more books, including 1983's "The Curse of Lono" and the 2003 memoir "Kingdom of Fear." He also contributed columns to the San Francisco Examiner that were later published as collections, and continued to publish irregularly in Rolling Stone. Thompson finished his career in journalism writing a weekly sports column for the ESPN website.

In 1963, Thompson wed Sandra Conklin, with whom he had a son named Juan. The couple later divorced in 1980. About 23 years after that, Thompson married his assistant Anita Bejmuk.

Following years of alcohol and cocaine abuse, which stemmed from his depression, Thompson fatally shot himself in the head in February of 2005 at his home in Woody Creek, Colorado. His private funeral was attended by nearly 300 people, including George McGovern, Jack Nicholson, Bill Murray, Benicio del Toro, Sean Penn, and Lyle Lovett.