Gina Neely net worth: Gina Neely is an American television personality, author, and restaurant owner who has a net worth of $2 million. She and her husband, Pat, are co-owners of Neely's Bar-B-Que, one of the most successful barbecue restaurants in the South,  and share their favorite dishes and family secrets on their television show, Down Home with the Neely's which airs on the Food Network.

After the show's premiere, Down Home with the Neely's became the highest-rated series debut in the five-year history of the Food Network's "In the Kitchen" series and it continues to be a top rated show. In 2009, the Neely's released their first cookbook, Down Home with the Neely's, and the book almost instantly became a New York Times Best Seller. In 2011, they released a second book, The Neely's Celebration Cookbook: Down Home Meals for Every Occasion, which hit the shelves during the same year that the couple opened their first restaurant in New York City, Neelys BBQ Parlor. Gina and Patrick were high school sweethearts and reunited at their 10-year reunion where they rekindled their relationship after both being in previous marriages, and ended up getting married in 1994. They reside in Memphis where Gina manages the catering division of Neely's Bar-B-Que, which makes up more than 25% of the restaurant's total sales, and she also oversees the sale of all Neely's products. Gina is a member of the Memphis Restaurant Association and is also involved in The Women's Empowerment Summit for the Memphis Housing Authority, The Dreamers Club for the National Civil Rights Museum, and is also an active member of the Cummings Street Missionary Baptist Church. In 2013, the couple announced that they were closing their Neely's Bar-B-Que restaurants in Memphis indefinitely, but encouraged fans and patrons to continue to enjoy their New York location. The Neelys have two daughters, Spenser (Gina's daughter from a previous marriage) and Shelbi, who is six years younger than her sister. 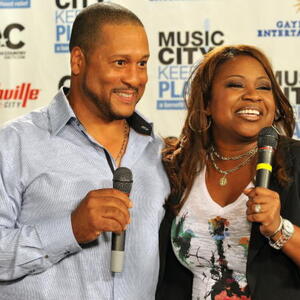