George Will Net Worth

in Richest Celebrities › Authors
George Will Net Worth:
$4 Million

George Will Net Worth: George Will is an American newspaper columnist, journalist, and author who has a net worth of $4 million. Will is a Pulitzer Prize winner and is best known for his conservative commentary on politics. Will was called "perhaps the most powerful journalist in America" by The Wall Street Journal in 1986

George Will was born in Champaign, Illinois in May 1941.  George received his MA and PhD degrees in politics at Princeton University. He served on the staff of Senator Gordon Allott from 1970 to 1972. He taught at the James Madison College of Michigan State University, the University of Toronto, and Harvard University. He was an editor for National Review from 1972 to 1978 and joined the Washington Post Writers Group in 1974. His biweekly column has been syndicated to 450 newspapers. Will served as a contributing editor for Newsweek from 1976 to 2011. He was noted for condemning the corruption of the Nixon presidency. He currently serves as a contributor for Fox News since 2013. Will worked as a news analyst for ABC News and was a founding member on the panel of ABC's This Week with David Brinkley in 1981. He has authored 14 books, including 2014's "A Nice Little Place on the North Side: Wrigley Field at One Hundred" and 2019's "The Conservative Sensibility". 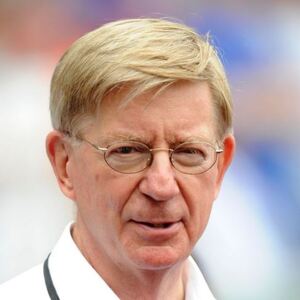