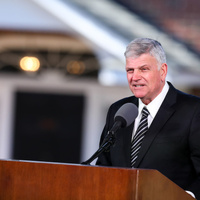 Franklin Graham net worth: Franklin Graham is an American Christian evangelist and missionary who has a net worth of $10 million. Franklin Graham was born in Asheville, North Carolina in July 1952. Graham is the president and CEO of the Billy Graham Evangelistic Association and of the international Christian relief organization Samaritan's Purse. Franklin is the son of evangelist Billy Graham and Ruth Bell Graham. Graham converted to Christianity at 22 years old. He has authored many books and has been no stranger to controversy over the years. Graham was criticized for his comments about Islam after the September 11, 2001 attacks. In January 2015 Graham organized a campaign to call for Duke University to cancel plans to have an amplified Muslim call to prayer each Friday on campus. He once praised Vladimir Putin's "gay propaganda law" while publicly supporting Russia's efforts to "protect children from any homosexual agenda."