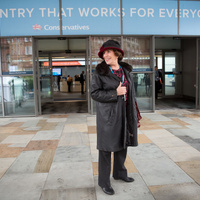 Edwina Currie Net Worth: Edwina Currie is a former British Member of Parliament who has a net worth of $5 million. Edwina Currie Edwina Currie was born in Liverpool, Lancashire, England in October 1946. As a member of the Conservative party Currie served as a Member of Parliament for South Derbyshire from June 1983 to May 1997. She also served in Parliamentary Under Secretary of State for Health from September 1986 to December 1988. Currie retired as Junior Health Minister after a controversy regarding salmonella in eggs. After being a politician she started a new career as a broadcaster and novelist. Currie has written six novels and four non-fiction books. The publication of her diaries in 2002 revealed a four year long affair with former Prime Minister of the United Kingdom and Leader of the Conservative Party John Major. Currie hosted the late night talk show Late Night Currie on BBC Radio Five Live and later presented the TV series Currie Night on HTV. She has appeared on reality TV series such as Wife Swap, Hell's Kitchen, and Celebrity Stars in Their Eyes. Currie won Celebrity Mastermind and All Star Family Fortunes. She also competed on Come Dine With Me and Strictly Come Dancing. In November 2014 Currie became a contestant on the reality TV series I'm a Celebrity…Get Me Out of Here!.