Dinesh Dsouza Net Worth: Dinesh Dsouza is an Indian-American political commentator, author, and filmmaker who has a net worth of $4 million. Dinesh Dsouza was born in Bombay, Maharashtra, India in April 1961. He is affiliated with conservative organizations and publications and served as a policy advisor for President Ronald Reagan.

D'Souza was president of the King's College from 2010 to 2012. He graduated from Dartmouth College and became a naturalized US citizen in 1991. D'Souza has authored many New York Times best-selling books including What's So Great About Christianity and Life After Death: The Evidence. He released the documentary film 2016: Obama's America in 2012 based on his 2010 book The Roots of Obama's Rage. The film has become the highest grossing conservative documentary ever produced in the US. D'Souza was indicted on charges of making illegal political contributions to a 2012 United States Senate campaign in January 2014. In May 2014 he pleaded guilty to a charge of using straw donors to make these illegal donations. D'Souza was sentenced to eight months in a community confinement center, a $30,000 fine, and five years parole. 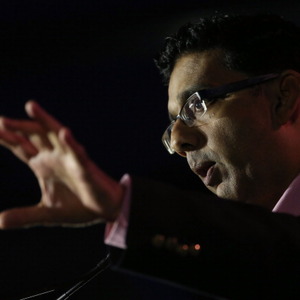