Suzuki is known for his TV and radio series as well as his books and documentaries about nature as well as the environment. His CBC Television science series The Nature of Things has been seen in over 40 nations. Suzuki has also been known for criticizing governments for their lack of taking actions to protect the environment. He founded the David Suzuki Foundation in 1990 and is a longtime activist on reversing global climate change. He served as director of the Canadian Civil Liberties Association from 1982 to 1987. In 2009 Suzuki won the Right Livelihood Award. His book The Legacy won the Nautilus Book Award. Suzuki is a Companion of the Order of Canada and was selected the greatest living Canadian in a CBC poll in 2004. He has authored 52 books including 15 children's books. He has been nominated for two CableACE Awards, a Gemini Award, and a Leo Award. 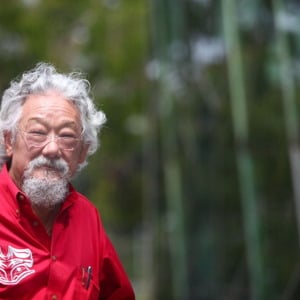