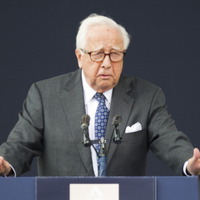 David McCullough net worth: David McCullough is an American author, historian, narrator, and lecturer who has a net worth of $8 million. David McCullough was born in Pittsburgh, Pennsylvania in July 1933. He is a two-time Pulitzer Prize winner and also won the National Book Prize twice. McCullough received the Presidential Medal of Freedom. He graduated from Yale University with an English degree and authored his first book The Johnstown Flood in 1968. McCullough has also authored the books The Great Bridge in 1972, The Path Between the Seas in 1977, Mornings on Horseback in 1981, Brave Companions in 1991, Truman in 1992, John Adams in 2001, 1776 in 2005, In the Dark Streets Shineth: A 1941 Christmas Even Story in 2010, The Greater Journey in 2011, The Wright Brothers in 2015, and The American Spirit: Who We Are and What We Stand For in 2017. He has also narrated several films and television series including Seabiscuit and The Civil War by Ken Burns.