Dave Eggers net worth: Dave Eggers is an American author, editor, and publisher who has a net worth of $8 million. Dave Eggers has accumulated his net worth through the sales of his many books such as "Sacrament," "How We are Hungry," "The Wild Things" and more. Other books by Dave include "A Heart breaking Work of Staggering Genius," "Zeitoun," "Surviving Justice: America's Wrongly Convicted and Exonerated" and more.

He has also written many humorous books, and screenplays, as well as writing for the progressive online magazine Salon.com. Eggers started his career writing for Salon.com as their editor and eventually started the magazine "Might. His first book, "A Heartbreaking Work of Staggering Genius," was about him raising his younger brother after cancer took their parents. It was listed as a number one best seller and gave Eggers the nomination for the Pulitzer Prize. It was listed as the "Best Book of the Year" by the Time news magazine. His book "Zeitoun" won him "The Courage in Media Award" from the Council of American-Islamic Relations in 2009. Eggers is the founder of the independent publishing house, McSweeney's, as well as being the co-founder of the literacy project 826 Valencia with teacher Ninive Calegari. 826 Valencia is a non-profit organization to help young people develop their writing skills and have extended this project all across the U.S. and are under the sponsorship of 826 National. In 2007 he was awarded the Heinz Award for all the contributions he has made to improve the lives of others. Eggers has also made many musical contributions such as designing the album covers for artists such as "Thrice" and "Paul Banks and the Carousels. He has also provided lyrics for One Ring Zero's song "The Ghost of Rita Gonzolo," from their album "As Smart as We Are. Dave Eggers was born in Boston, Massachusetts in 1970. He has three siblings, Bill, Christopher and Beth. He attended high school in Lake Forest, near Chicago and the University of Illinois at Urbana Champaign.

He and wife Vendela Vida, who is also a writer, and their two children, are currently living in San Francisco. 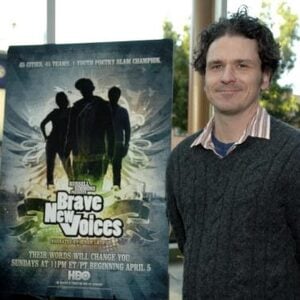