Cornel West Net Worth: Cornel West is an American philosopher, activist, author, and academic who has a net worth of $500 thousand. Cornel West was born in Tulsa, Oklahoma in June 1953. West is a prominent member of the Democratic Socialists of America. Cornel is the son of a Baptist minister and graduated from Harvard University before earning his Ph.D.

at Princeton University, becoming the first African American to earn the degree in philosophy at that school. West was a Professor of African American Studies at Princeton and in 2011 became Professor of Philosophy and Christian Practice at the Union Theological Seminary in New York City. He also taught at Harvard but left after a publicized dispute with the president of the school. Cornel is often focused on the roles of race, gender, and class in American society, as well as "radical conditionedness". He has authored over 20 books including his most influential Race Matters and Democracy Matters. He has been frequently featured on CNN, C-SPAN, PBS, and MSNBC. He co-hosts a radio show called Smiley and West with Tavis Smiley. He has released several hip hop and spoken word albums and appeared in The Matrix Reloaded and The Matrix Revolutions. 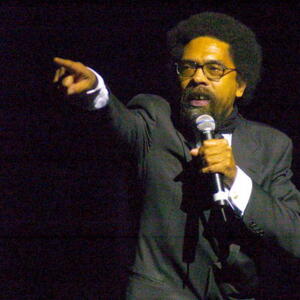