Cormac McCarthy net worth: Cormac McCarthy is an American novelist, playwright, and screenwriter who has a net worth of $35 million. Cormac Mccarthy gained his net worth by writing novels like Southern Gothic and No Country for Old Men. Charles McCarthy was born in Providence, Rhode Island in July 1933. He was awarded with the Ingram Merrill Award for creative writing and attended the University of Tennessee.

His first novel The Orchard Keeper was published in 1965 by Random House. McCarthy has penned ten novels. His book The Road, written in 2006, won the Pulitzer Prize. His novel No Country for Old Men was made into a film and won four Academy Awards. He won the National Book Critics Circle Award and U.S. National Book Award for All the Pretty Horses. Besides No Country for Old Men, The Road, Child of God, and All the Pretty Horses were also made into movies. Time magazine ranked Blood Meridian as one of their 100 best English-language books (1923-2005). The Road was named by The Times in 2010 as the #1 book (2000-2010). McCarthy's name has been frequently brought up in regards to a Nobel Prize in Literature. His last novel was published in 2006 and he is said to be working on three more. Oprah Winfrey chose The Road to be part of her Book Club in April 2007. He appeared on her show in June of that year, giving his first television interview. His typewriter was put up for auction in 2009 and fetched over a quarter of a million dollars. McCarthy has been married three times and has two children. 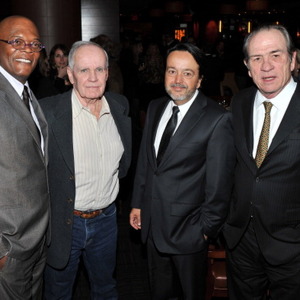