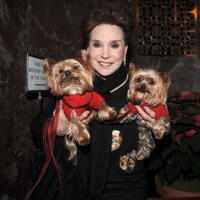 Cindy Adams Net Worth: Cindy Adams is an American gossip columnist and writer who has a net worth of $50 million. Cindy Adams was born in Manhattan, New York in April 1930. Cindy did not graduate from high school because her principal wanted her to learn how to sew. She worked as a photographer's model and met her husband comedian and humorist Joey Adams. The two married in 1952 and Joey passed away in 1999. Cindy started as a gossip columnist in 1979 for the New York Post. She became an animal activist after her husband passed away and advocated for strengthening regulations on boarding kennels. She has authored seven books. Adams became ill in 2010 and avoided medical help for her Christian Scientist beliefs until her friends Barbara Walters and "Judge Judy" forced her to receive medical treatment. Cindy was close friends with the late Joan Rivers and attended her funeral in September 2014.