Chuck Yeager net worth: Chuck Yeager was a retired American brigadier general of the United States Air Force who had a net worth of $1.5 million dollars at the time of his death in 2020 at the age of 97. Chuck was best-known for being the first pilot to break the sound barrier. A feat he accomplished in 1947 at the age of 24.

Chuck Yeager was born in Myra, West Virginia on February 13, 1923. He went to military camp when he was a teenager. After graduating from high school, he joined the U.S. Army Air Force, and began working as an aircraft mechanic at George Air Force Base in California. He soon switched over to pilot training. Decades later when asked why he switched from maintenance to flying, Chuck replied: "I was in maintenance, saw pilots had beautiful girls on their arms, didn't have dirty hands, so I applied."

Chuck would soon become one of the most widely respected pilots in the Armed Forces. During WW2, flying a P-51, he shot down 13 German planes, five in a single day. That earned him "ace" status, something some pilots work their whole careers to achieve. He was also shot down over France but manage to evade capture thanks to the French Resistance.

After the war, Chuck became a test pilot at Muroc Army Air Field, which today is known as Edwards Air Force Base. On October 14, 1947, he became the first person to break the sound barrier, flying the X-1 at Mach 1.07 at 45,000 feet. The Air Force kept the accomplishment a secret for several months until the news was leaked to Aviation Week magazine. In June 1948 the Air Force finally came forward and confirmed the feat. He went on to break multiple speed and altitude barriers before retiring from the Air Force in 1975. His work and expertise with aircraft was instrumental in the development of the space program.In December 1953 Chuck flew the X-1A 2.5X the speed of sound, setting a world record.

In the 1960s Chuck worked as the commander of the astronaut school at Edwards. During Vietnam he charged back into combat, flying 127 missions while holding the rank of colonel. During this time he flew B-57 bombers.

Chuck retired from the Air Force in 1975 as a brigadier general.

Chuck was featured prominently in Tom Wolfe's 1979 book "The Right Stuff". In the 1983 movie based on the book, Chuck was played by actor Sam Shepherd. 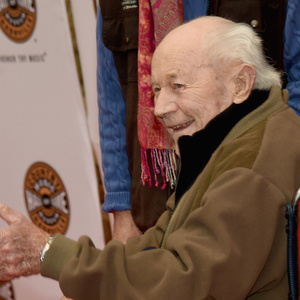