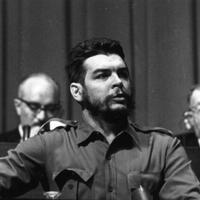 Che Guevara Net Worth: Che Guevara was an Argentine revolutionary, physician, author, diplomat, and military theorist who had a net worth of $50 thousand. Ernesto Guevara was born in Rosario, Santa Fe, Argentina in June 1928. Guevara played a major part in the Cuban Revolution. His image is often used as a counterculture symbol of rebellion in popular culture. Che traveled throughout South America as a medical student. What he saw led him to get involved in Guatemala's social reforms. In Mexico City Guevara met Raul and Fidel Castro and joined their 26th of July Movement. He played a crucial role in a two year guerilla campaign to overthrow Cuban dictator Fulgencio Batista. He served in the new Cuban government. He worked as minister of industries, helped head a literacy campaign, served as national bank president for Cuba's armed forces, trained militia forces, and brought Soviet nuclear-armed ballistic missiles to Cuba. As a writer Che composed a seminal manual on guerrilla warfare and a best-selling memoir. He left Cuba in 1965 and tried to lead revolutions in Congo-Kinshasa and Bolivia. He was named by Time magazine as one of the 100 most influential people of the 20th century. The Maryland Institute College of Art named a photo of Che titled Guerrillero Heroico the "most famous photograph in the world". Che married Aleida March in 1959 and was previously married to Hilda Gadea. He had five children. Guevara was captured by CIA assisted Bolivian forces and summarily executed on October 9, 1967 at the age of 39. In 2008, his life and work as a revolutionary was turned into a two-part film from director Steven Soderbergh, starring Benicio del Toro as Guevara. The first part, The Argentine, details his involvement with the Cuban revolution and Fidel Castro, while the second part, entitled Guerilla, deals with his time as guerilla fighter in Bolivia.