How much is Charlie Trotter Worth?

Charlie Trotter Net Worth: Charlie Trotter was an American chef and restaurateur who had a net worth of $2 million. Born Charles Trotter on September 8, 1959 in Chicago, Illinois, he made a name for himself as one of the most revered chefs in the world. He also was regarded to be an acclaimed leader in molecular gastronomy. Even though he earned a degree in political science from the University of Wisconsin–Madison in 1982, he would embark on a diametrically opposite career as a professional cook. In 1990, he became the host of the PBS cooking show The Kitchen Sessions With Charlie Trotter, where he presented his recipes and cooking techniques in detail. Throughout his career he wrote fourteen cookbooks and three management books, and also promoted a line of organic and all-natural gourmet foods distributed nationally. Trotter was owner of Charlie Trotter's restaurant and Trotter's To Go catering store in Chicago, which were closed in 2012. As a reason behind the closures he cited that he had a desire to travel and to pursue a master's degree. The world lost this incredible cook on November 5, 2013, when he was found unconscious in his home and shortly after was pronounced dead at Northwestern Memorial Hospital. Married three times, Charlie Trotter had only one son named Dylan from his second marriage. 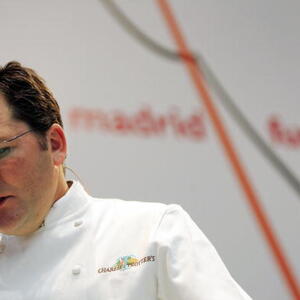