How much is Charles Lindbergh Worth?

Charles Lindbergh net worth: Charles Lindbergh was an American aviator, military officer, inventor, explorer, and author who had a net worth of $20 million. Charles Lindbergh was born in Detroit, Michigan in February 1902 and passed away in August 1974. At 25 years old as a U.S. Air Mail pilot he made a nonstop flight from Long Island, New York to Paris in the Spirit of St. Louis, a monoplane. Lindbergh became the first person to accomplish a solo transatlantic flight and a nonstop flight between the Americans and the European mainland. He was given the Medal of Honor for his accomplishment. Lindbergh's infant son Charles Jr. was kidnapped and murdered in March 1932 which led to the U.S. making kidnapping a federal crime. He was involved in some controversy regarding his views but flew fifty combat missions in World War II. Charles was married to Anne Morrow Lindbergh but had secret relationships with three European women. Charles Lindbergh passed away on August 26, 1974 at the age of 72 from complications of lymphoma. 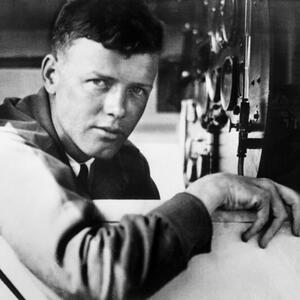