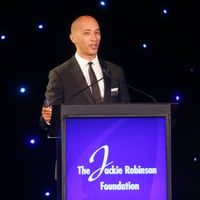 Byron Pitts net worth and salary: Byron Pitts is an American journalist and author who has a net worth of $5 million. Byron Pitts was born in Baltimore, Maryland in October 1960. Byron was functionally illiterate until 12 years old and had a debilitating stutter as a child. Pitts graduated from Ohio Wesleyan University in 1982. In 1983 he worked for WNCT-TV in Greenville, North Carolina as a weekend sports anchor. In 1984 he became a military reporter for WAVY-TV in Portsmouth, Virginia, and in 1986 he was a reporter for WESH-TV in Orlando, Florida. He was a reporter for WFLA-TV in Tampa, FL in 1988 and then went to WCVB-TV in Boston, MA in 1989. From 1994 to 1996 he was a general assignment reporter in Atlanta, Georgia. He became a correspondent for CBS Newspath in 1997 and in May 1998 became CBS News Correspondent first in Miami, then Atlanta, and then New York City in 2001. He served as a lead reporter for coverage of the September 11th, 2011 attacks and won an Emmy Award. Pitts was also an embedded reporter who covered the Iraq War. He has reported on Hurricane Katrina, the Elian Gonzalez story, and the refugee crisis in Kosovo. He also won an Emmy Award for covering the Chicago train wreck of 1999 and won a National Association of Black Journalists Award in 2002. In 2009 He wrote Step Out of Nothing: How Faith and Family Helped Me Conquer Life's Challenges. Byron left CBS in March 2013 and currently works for ABC News.