What Is Bret Baier's Net Worth and Salary?

Bret Baier is an American television host, writer, and producer who has a net worth of $20 million. He hosts, writes, and produces "Special Report with Bret Baier" on Fox News, and he previously served as the network's Pentagon correspondent and Chief White House Correspondent. His annual salary at Fox News is $7 million. Bret appeared as himself in a 2017 episode of the Netflix series "House of Cards," and he has published the books "Special Heart: A Journey of Faith, Hope, Courage and Love" (2014), "Three Days in January" (2017), "Three Days in Moscow: Ronald Reagan and the Fall of the Soviet Empire" (2018), "Three Days at the Brink" (2019), and "To Rescue the Republic: Ulysses S. Grant, the Fragile Union, and the Crisis of 1876" (2021).

Bret Baier was born William Bret Baier on August 4, 1970, in Rumson, New Jersey. He grew up in a Catholic household and was an altar boy during his youth. Bret attended the private Atlanta Catholic school the Marist School, and after graduating in 1988, he enrolled at Indiana's DePauw University, where he joined the Xi Chapter of the Sigma Chi fraternity. Baier earned a Bachelor of Arts degree in English and political science in 1992.

Bret's career began at a TV station in Rockford, Illinois, then he joined the CBS affiliate WRAL-TV in Raleigh, North Carolina. In 1998, he was hired as Fox News' Atlanta bureau chief after sending the network an audition tape. On September 11, 2001, Baier drove to Virginia to report on the terrorist attack on the Pentagon and was subsequently hired to be the network's Pentagon correspondent. During his five-year stint as the Pentagon correspondent, he traveled to Afghanistan 13 times and Iraq 12 times. In 2006, Bret became the network's Chief White House Correspondent and covered George W. Bush's second term. The following year, he started substituting for Brit Hume on "Special Report," and when Hume retired in 2008, it was announced that Baier would replace him. 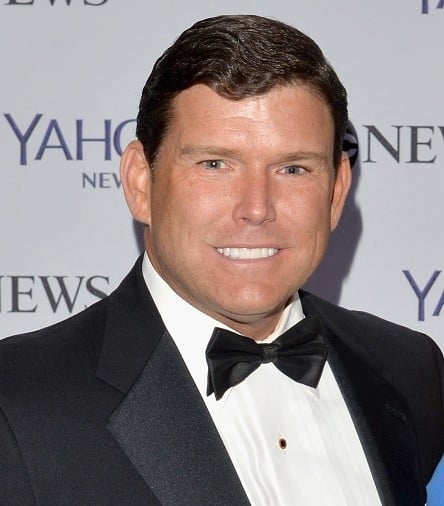 "Special Report with Bret Baier" premiered in January 2009, and in 2012, he co-anchored "America's Election HQ" with Megyn Kelly. Bret has anchored more than 30 Fox News political specials, and he has reported from over 70 countries. He has appeared on numerous television shows, including "Glenn Beck," "Happening Now," "The Real Story with Gretchen Carlson," "Fox and Friends," "Hannity," "Tucker Carlson Tonight," and "Outnumbered." In 2011, Conservative Watchdog group Judicial Watch released White House emails that were obtained under the Freedom of Information Act in an attempt to prove anti-Fox News bias in Barack Obama's administration. In one email from 2009, then-Deputy White House Communications Director Jen Psaki referred to Baier as a "lunatic."

Bret married Amy Hills on October 9, 2004, and they have two sons, Paul (born June 29, 2007) and Daniel (born July 7, 2010). Paul was born with a heart defect that can be fatal, and he has undergone open-heart surgery several times.  Before Paul's 2008 surgery, President George W. Bush invited the family to visit him at the White House, and he asked the White House physician to keep him updated on Paul's progress. A practicing Roman Catholic, Baier attends Georgetown's Holy Trinity Catholic Church. In 2009, the Sigma Chi Fraternity named him a "Significant Sig."

In 2016, Baier received the Kenneth Y. Tomlinson Award for Outstanding Journalism from the Robert Novak Journalism Fellowship Program, and in 2017, the National Press Foundation honored him with the Sol Taishoff Award for Excellence in Broadcast Journalism. In 2018, Bret was presented with the Municipality of Urbino's Urbino Press Award.