Bob Woodward net worth: Bob Woodward is an American investigative journalist and author who has a net worth of $25 million. He has worked for The Washington Post since 1971. His current title is associate editor. Woodward became one of the most famous journalists in the world thanks to his reporting on the Watergate scandal that ultimately ended Nixon's presidential administration. He made contributions to two Pulitzer Prizes won by The Post, the first for Public Service in 1973 related to the paper's coverage of Watergate and the second in 2002 for National Reporting related to coverage of September 11th.

Robert Upshur Woodward was born in Geneva, Illinois on March 26 1943. He graduated from Yale in 1965. After graduating he served five years in the US Navy. During his time in the Navy he served aboard the USS Wright aircraft carrier where he was one of two officers who held nuclear launch codes.

After leaving the Navy he was accepted into Harvard Law School but chose not to attend and instead applied for a job at The Washington Post. In 1972 Bob was assigned to work with Carl Bernstein in reporting on a break-in at the Watergate hotel and office complex. Their subsequent dogged reporting eventually led to the resignation of President Richard Nixon.

Books, Royalties and Earnings: Woodward has authored many books about American politics, of which 13 have become #1 best sellers. His first book, co-authored with Carl Bernstein, 1974's "All the President's Men", was adapted into a film starring Dustin Hoffman (as Woodward) and Robert Redford (and Bernstein), in 1976.

In September 2018, Woodward released a book titled "Fear" which detailed the inner-workings of Donald Trump's White House. The book sold 1.1 million copies in its first week which is a record for first week sales for its publisher Simon & Schuster. At that rate, Woodward likely earned $10-15 million before taxes thanks to advances and royalties on the book. 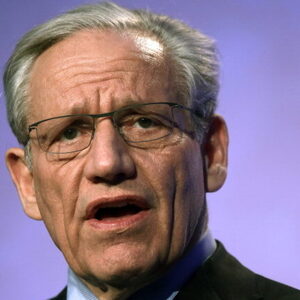