Bob Schieffer Net Worth: Bob Schieffer is an American television journalist who has a net worth of $10 million. Born Bob Lloyd Schieffer on February 25, 1937, in Austin, Texas, he is widely known for his long tenure in CBS, America's major commercial broadcasting television network. After graduation, Schieffer spent some time serving in the US Air Force before becoming a reporter for the Fort Worth Star-Telegram.

Then, he briefly worked for WBAP in Dallas, before eventually joining CBS in 1969. He made his CBS beginnings as anchor for the Sunday broadcasts. Since, he anchored the Saturday edition of CBS Evening News from 1973 to 1996; served as chief Washington correspondent since 1982, and moderator of the Sunday popular public affairs show Face the Nation since 1991. He was the man to step in Dan Rather's shoes as interim weekday anchor before Katie Couric took over in September 2006. Since 2011, he has been one of the major substitutes for Scott Pelley. What's more, Bob Schieffer is one of the few journalists to cover all four of the major Washington national assignments: the White House, the Pentagon, United States Department of State, and United States Congress. Thus, his career with CBS has closely entangled and almost exclusively devoted to national politics. To date, Schieffer has won six Emmys and was named Broadcaster of the Year in 2002 by the National Press Foundation. He also penned four books, including Face the Nation: My Favorite Stories from the First 50 Years of the Award-Winning News Broadcast (2004) and Bob Schieffer's America (2008). When it comes to his private life, Schieffer is married to Patricia Penrose Bishop, with whom he has two daughters. 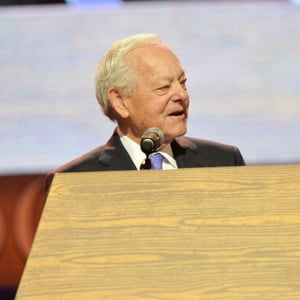