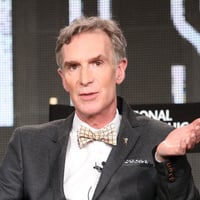 What is Bill Nye's Net Worth and Salary?

Bill Nye is an American comedian, television host, mechanical engineer and science educator who has a net worth of $8 million. Bill Nye is best known for being the host of the science program "Bill Nye the Science Guy", which aired between 1993 and 1998.

William Sanford Nye, better known as Bill Nye or Bill Nye the Science Guy, was born in Washington D.C., on November 27, 1955. His mother, Jacqueline Jenkins-Nye (1921-2000), was a codebreaker during World War II. She was part of an elite group of young women during the war known as the "Goucher Girls" who were alumnae of Goucher College in Maryland, and were recruited by the Navy to crack German and Japanese codes. His father, Edwin Darby "Ned" Nye (1917-1997), was a contractor that also served in World War II. In fact, Ned Nye had been captured during the war and spent four years as a prisoner of war in a Japanese camp.

Nye attended high school at Sidwell Friends on scholarship. After graduating from high school in 1973, he attended Cornell university in Ithaca, New York, where he studied at the Sibley School of Mechanical and Aerospace Engineering. It was at Cornell that his love for science really deepened, in particular after he took a class with Carl Sagan on astronomy. Nye graduated from college in 1977 with a BS degree in mechanical engineering.

Following graduation from Cornell, Nye moved to Washington state to work as an engineer for the Boeing Corporation and Sundstrand Data Control near the city of Seattle. While at Boeing, Nye was responsible for inventing a hydraulic resonance suppressor tube that was put to use on Boeing 747 airplanes. During this same period, Nye also applied four times to astronaut training program at NASA, although all of his applications were unsuccessful.

While he worked for Boeing, Nye began working on the side as a comedian after he won a Steve Martin lookalike contest in 1978. He would work full days at Boeing, and then do stand-up comedy at night. In his spare time on the weekends he also volunteered as a "Science Explainer" at the Pacific Science Center.

In October 1986, Nye quit his job at Boeing to focus on his comedy career. That same year, he landed a job as a writer/actor on the local Seattle sketch comedy show "Almost Live!". It was while on this show that his famous nickname was coined. One day, the host of the show mispronounced the word "gigawatt" and Nye corrected him live on the air. The host immediately quipped "Who do you think you are? Bill Nye… the Science Guy?". The name has stuck ever since. He continued to look for work on television, and in 1989 landed the job of host for the short education show "Fabulous Wetlands", sponsored by the Washington State Department of Ecology. He followed this up with appearances on Disney Channel's "All-New Mickey Mouse Club", and live-action educational segments on "Back to the Future: The Animated Series" (1991-1993).

In 1993, Nye joined forces with James McKenna, Erren Gottlieb, and Elizabeth Brock, to develop a pilot for the Seattle public broadcasting station KCTS-TV. They named their new show "Bill Nye the Science Guy". Disney distributed the show, and it was produced together by Walt Disney Television and Rabbit Ears Productions. The show was incorporated to be part of a package of syndicated series offered to local stations for scheduling so they would fulfill the requirements of the Children's Television Act. As a result, "Bill Nye the Science Guy" actually was the first show to be concurrently aired on public and commercial television stations. 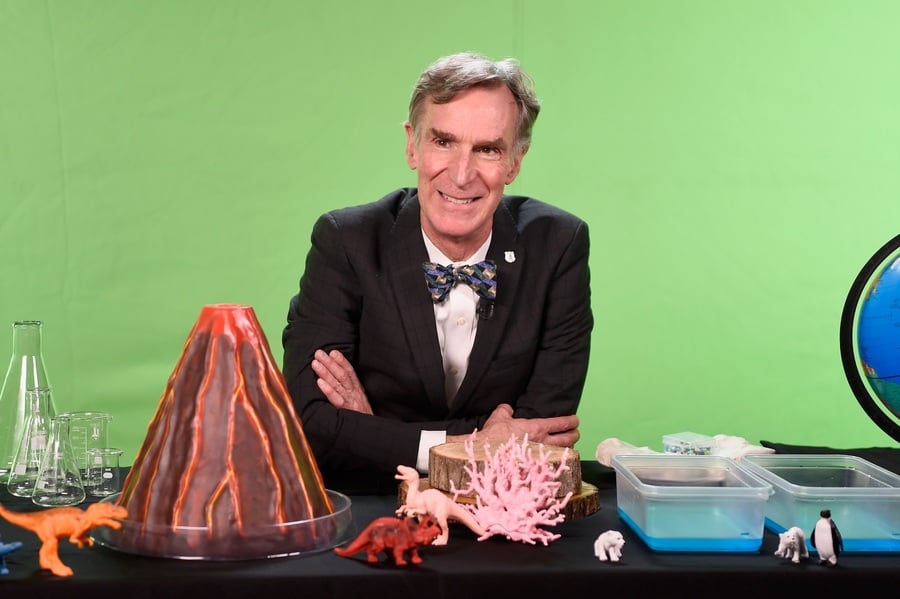 During its time on air from 1993 to 1998, "Bill Nye the Science Guy" enjoyed some of the highest viewership numbers for educational television shows in the United States. Additionally, the way the show made science entertaining and approachable made it a popular teaching tool utilized by teachers in classrooms. The show won nineteen Emmy Awards, out of the 23 nominations it received. Nye became famous for his attire on the show, a powder blue lab coat and bow tie.

Following in the success of "Bill Nye the Science Guy", Nye had hoped to develop a new show aimed at a more mature audience, and covering more controversial topics in science like global warming. However, due to differences in creative concepts, disputes over money, and budgetary restrictions, the show struggled to get off the ground. "The Eyes of Nye" eventually was picked up by American Public Television (after being rejected by PBS), but it only aired for one season in 2005.

Nye has since continued to work as an author, educator, public speaker, and television host. He has written over a dozen books, including titles like "Undeniable: Evolution and the Science of Creation" (2014). In addition to his many other media appearances, in 2017 he hosted the Netflix series "Bill Nye Saves the World".

In August 2017 Bill Nye and his co-creators of "Bill Nye the Science Guy" filed a $37 million lawsuit against Disney alleging the studio failed to pay their 50% cut of profits produced by the show. Nye's attorneys alleged that Disney "conspired to prevent [Bill] from receiving full and reasonable accounting of the expenses of the BNSG series and its derivative works." Nye has claimed that an auditor hired at his expense estimated that Disney's under-reporting totals $28 million, of which $9.4 million would be owed to him personally.

Nye is the holder of three different United States patents for: ballet pointe shoes, an educational magnifying glass, and a device that can train an athlete to throw a ball.

Nye married Blair Tindall, a musician, in February 2006, but he had the marriage annulled just seven weeks later after their marriage license was declared to be invalid. Then, in 2007 he obtained a restraining order against Tindall after she broke into his house. He maintains residences in California, New York City, and on Mercer Island near Seattle.