Big Ang net worth: Big Ang was an American author and reality star who had a net worth of $500 thousand. Big Ang, also known as Angela Raiola, was born in Brooklyn, New York on June 30, 1960. She is a single mother of two, and the niece of Salvatore "Sally Dogs" Lombardi, a former captain within the Genovese crime family.

She is known as a "mob moll", and is quite popular within the mob community. She co-owns multiple mob hangouts including the Drunken Monkey bar. She has also dated many gangsters. She has a reputation for a wicked sense of humor and savvy-business sense. She has an opulent lifestyle, partially due to her own business acumen, and partially the result of gifts from admirers. Some say her nickname is based on her large breast size and quite pronounced lips. Others say that it is a response to her larger-than-life personality. She joined the cast of VH1's reality series, Mob Wives, and has proven to be a popular character. She had her own spin-off show called Big Ang that premiered on VH1, and also released a book entitled, Bigger is Better: Real Life Wisdom from the No-Drama Mama, in September of 2012. In 2015, she also appeared on the hit reality series, Celebrity Wife Swap, where she traded lives with Alana Stewart, and on Couples Therapy with her husband, Neil Murphy. Unfortunately, Big Ang died on February 18, 2016 at the age of 55 after a year-long battle with throat cancer. She was married to Murphy from 2009 until her passing and had two children. 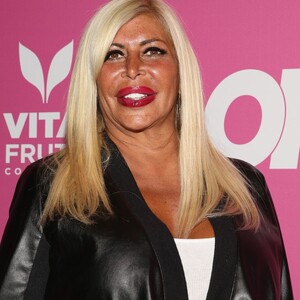