B. Smith Net Worth

in Richest Celebrities › Authors
B. Smith Net Worth:
$20 Million

B. Smith net worth: B. Smith was an American restaurateur, model, author, and television personality who had a net worth of $20 million at the time of her death in 2020. Unfortunately, B. Smith died on February 22, 2020 at the age of 70 after a long battle with Alzheimer's.

B. Smith was born Barbara Elaine Smith in Everson, Pennsylvania in August 1949. As an actress she appeared in episodes of the TV series Mister Rogers' Neighborhood, The Cosby Mysteries, B. Smith with Style, and Sabrina, the Teenage Witch. B. Smith also appeared in the film Santorini Blue.

In 1976 she was the first black model to be featured on the cover of Mademoiselle magazine. Over her career she owned many self-titled restaurants. She opened the first such restaurant in 1986 in New York City. She developed a home collection for Bed Bath & Beyond and a furniture collection for La-Z-Boy. She authored the books B. Smith's Entertaining and Cooking for Friends, B. Smith's Rituals and Celebrations, and B. Smith Cooks Southern Style. She also co-authored the book Before I Forget with her husband which detailed her journey with early-onset Alzheimer's. 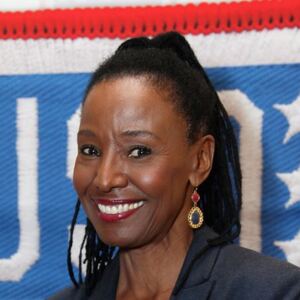