He wrote many popular plays including All My Sons in 1947, Death of a Salesman in 1949, The Crucible in 1953, and A View from the Bridge in 1955. He wrote screenplays for the films All My Sons, Let's Make Love, The Misfits, Everybody Wins, Death of a Salesman, and the Crucible. He won many awards including the Pulitzer Prize for Drama, the Dorothy and Lillian Gish Lifetime Achievement Award, the Prince of Asturias Award, and the Jerusalem Prize. Miller was married to Marilyn Monroe from 1956 to 1961 and testified before the House Un-American Activities Committee. Arthur Miller passed away on February 10, 2005 at 89 years old. 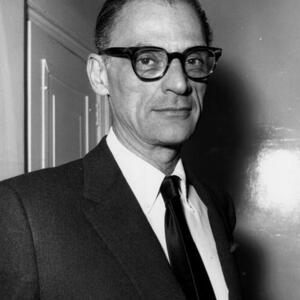