Aron Ralston net worth: Aron Ralston is an American mountaineer, outdoorsman, and motivational speaker who has a net worth of $4 million dollars. Aron Ralston was born in Marion, Ohio, and grew up in Denver, Colorado. He went on to graduate from Carnegie Mellon University with degrees in Mechanical Engineering and French.

After working as a mechanical engineer at Intel for a number of years, he decided to leave that life behind, and moved to Colorado to focus on mountain climbing. His goal was to climb the "fourteneers", fifty-nine mountains in Colorado that are all over 14,000 feet high. In 2005, he became the first person to climb all of them solo and in the winter. In 2003, while on a solo climb, he became trapped by a boulder. After five days, he realized that the only way to free himself was to cut off his own arm. He broke the bones of his arm and amputated it using a pocket-knife, then rappelled down a cliff face, and hiked his way out of the canyon. His ordeal was later turned into the Oscar-nominated film, "127 Hours" starring James Franco. Aron now works primarily as a motivational speaker. 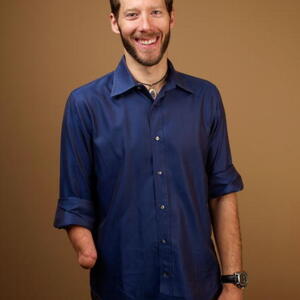