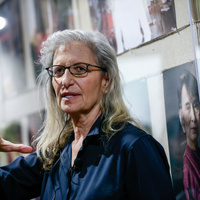 What is Annie Leibovitz's net worth and salary?

Annie Leibovitz is an American portrait photographer who has a net worth of $50 million. Annie Leibovitz has taken some of the most iconic photos of celebrities ever. Her famous subjects have included John Lennon and Yoko Ono, Queen Elizabeth II, LeBron James, Demi Moore, and Miley Cyrus, among many others. Notably, Leibovitz is the first woman to have had a feature exhibition at Washington's National Portrait Gallery.

She began her artistic career as a musician and painter, graduating from the San Francisco Art Institute in the late 60s.  After spending a few years overseas, where she began focusing solely on photography, she returned to the US, and began one of the most successful photography careers ever.  She first made a name for herself as a staff photographer for Rolling Stone.  She rose to become Chief Photographer, and held the position from 1983 to 1993.  Some of her more famous photographs include the last portrait of John Lennon just five hours before his assassination; the photo of Bruce Springsteen used on the cover of the "Born in the U.S.A." album; Whoopi Goldberg in a bathtub full of milk; Keira Knightley and Scarlett Johansson semi-nude with Tom Ford on the cover of Vanity Fair; Demi Moore's nude and pregnant cover photo, also for Vanity Fair; and Queen Elizabeth II when she visited the United States.  She photographed The Rolling Stones on tour, and has long been a favorite photographer for music artists.  She has shot portraits of Sting, Dolly Parton, Cyndi Lauper, Miley Cyrus, Michael Jackson, Lady Gaga, and Rihanna, among many, many others.  She suffered severe financial problems in the late 2000s, and began putting her everything she owned including the rights to many of her famous photos, up for sale.  She was given somewhat of a reprieve, and was able to retain the rights to her photos.

Despite having had an archive worth around $50 million, Leibovitz had a history of incautious financial dealings that caused her significant economic problems. In early 2009, she had to borrow $15.5 million from the Art Capital Group. As collateral she was forced to put up several houses and relinquish the rights to all of her photographs. That loan eventually ballooned to $24 million. In 2009, Art Capital Group sued Annie for failing to repay these loans. The lawsuit was eventually withdrawn. Leibovitz was later sued by Brunswick Capital Partners for failure to pay for its financial services.

Liebovitz has since worked to restructure her debt and pay back the loan to avoid losing her life's work which she was forced to use as collateral. In 2012 she listed her New York City Townhouse for $33 million. The house finally sold in 2012 for $28.5 million. In June 2014, Annie purchased an $11.25 million apartment on the Upper West Side of Manhattan, signaling that her financial problems had finally been settled. 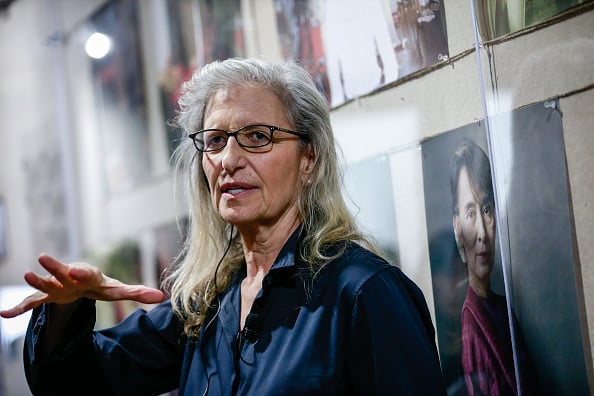 Annie Leibovitz was born on October 2, 1949 in Waterbury, Connecticut as the third of six children of Samuel, a lieutenant colonel in the US Air Force, and Marilyn, a modern dance instructor. She is of Jewish heritage. Due to the service of Leibovitz's father, the family moved often. It was while stationed in the Philippines during the Vietnam War that Leibovitz began taking photographs. Back in the United States, she went to Northwood High School in Silver Spring, Maryland, where she developed her interest in the arts. Leibovitz went on to attend the San Francisco Art Institute; there, she studied painting before switching her major to photography.

In 1969, Leibovitz did a stint on a kibbutz in Amir, Israel. Returning to the US the next year, she began her photography career as a staff photographer for Rolling Stone magazine. In 1973, Leibovitz was promoted to chief photographer by publisher Jann Wenner; she remained in that position for the next decade. During her tenure, she became renowned for her intimate celebrity portraits, which helped define the image of Rolling Stone. Among her most famous portraits was the one she took of John Lennon and Yoko Ono on December 8, 1980, just five hours before Lennon was murdered. The picture, which went on to grace the cover of Rolling Stone, depicts the couple lying on the floor with a naked Lennon curled up around Yoko, kissing her on the cheek. Other notable subjects photographed by Leibovitz for Rolling Stone include David Cassidy, Dolly Parton, Arnold Schwarzenegger, and the members of Fleetwood Mac. 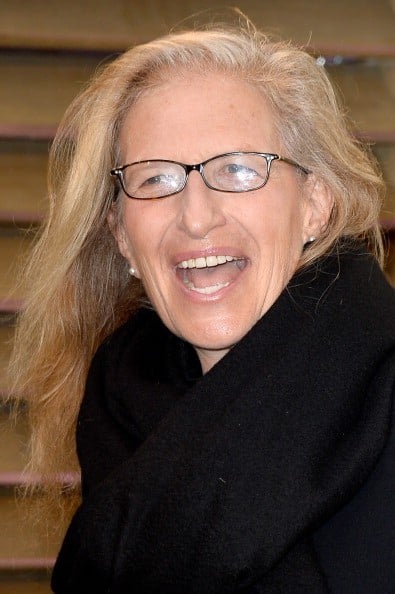 After leaving Rolling Stone magazine, Leibovitz joined Vanity Fair. For the magazine, she took two highly publicized photographs of Demi Moore, including one in which the actress was nude and pregnant. Leibovitz photographed celebrities in various other capacities over the years, including for a global 1987 American Express ad campaign that won her a Clio Award. In 1991, Leibovitz mounted an exhibition at the National Portrait Gallery in Washington, DC, making her the first woman and second living portraitist to have a feature exhibition there. Later in the decade, she began working regularly for Vogue. Her photographed subjects for that magazine have included Lady Gaga, Adele, and Benedict Cumberbatch.

Leibovitz remained prolific into the new millennium. In 2007, a retrospective of her work was held at the Brooklyn Museum; it subsequently went on the road, showing at such places as Washington's Corcoran Gallery of Art and San Francisco's Legion of Honor. Also in 2007, Leibovitz was hired by Disney to do a series of celebrity photographs for a Walt Disney Parks and Resorts ad campaign. In the 2010s, she had exhibitions in such cities as Moscow, New York, and Los Angeles. Leibovitz also took photographs of celebrities including Kim Kardashian, Kanye West, and Reese Witherspoon, and was the principal photographer for the 2016 Pirelli calendar featuring Amy Schumer, Patti Smith, and Serena Williams, among other women.

Leibovitz has not been without her fair share of controversies over the years. In 2008, she was criticized for her photograph of LeBron James and Gisele Bündchen, which appeared on the cover of Vogue. Although James made history as the first black man to grace that publication's cover, his pose – with his hand wrapped around Bündchen's waist – drew backlash for its resemblance to a "King Kong" movie poster and its racial connotations. Also in 2008, Leibovitz garnered controversy for allegedly photographing a topless Miley Cyrus, who was 15 years old at the time. It turned out that the singer and actress was actually wrapped in a bedsheet.

In 1989, Leibovitz began a relationship with writer and activist Susan Sontag. The relationship lasted until Sontag's death in 2004. It has never been fully disclosed whether it was a romance or a close friendship, although Leibovitz has asserted that "lover" is an accurate descriptor for Sontag's role in the relationship. Leibovitz has three daughters: Sarah and twins Susan and Samuelle.

In 2002 Annie bought her first of what became a three townhouse compound in New York City's West Village neighborhood. That first purchase in 2002 cost $4.2 million and allowed Annie to acquire two townhomes. She bought the third townhome for $1.9 million in subsequent years. Between 2002 and 2009 she gut renovated the three homes, one of which was converted into a photography studio. In December 2012 she listed the combined three-home-property for $33 million, ultimately accepting $28.5 million in 2014 from Ralph Lauren's son David Lauren.

In June 2014, Annie purchased an $11.25 million apartment on the Upper West Side of Manhattan.