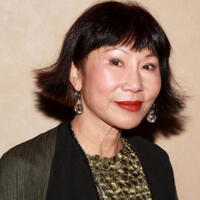 Amy Tan net worth: Amy Tan is an American writer who has a net worth of $8 million. Amy Tan was born in Oakland, California in February 1952. One of her best known works is the novel The Joy Luck Club which was published in 1989 and later adapted into a film in 1993. Tan has also authored the novels The Kitchen God's Wife in 1991, The Hundred Secret Senses in 1995, The Bonesetter's Daughter in 2001, Saving Fish from Drowning in 2005, Rules for Virgins in 2012, and The Valley for Amazement in 2013. Tan authored the short stories Fish Cheeks in 1987 and the children's book The Moon Lady in 1992 and Sagwa, The Chinese Siamese Cat in 1994. She has also authored the non-fiction works Mid-Life Confidential: The Rock Bottom Remainders Tour America With Three Cords and an Attitude, Mother, The Opposite of Fate: A Book of Musings, and Hard Listening.