Amanda Knox net worth: Amanda Knox is an American author who has a net worth of $500 thousand. Amanda is best-known for being convicted and eventually exonerated in the 2007 murder of Meredith Kercher.

Amanda Knox was born in Seattle, Washington in July 1987. In 2007, while a student at the University of Washington Amanda was studying abroad in the Italian city of Perugia. On November 1, 2007, Amanda's roommate Meredith Kercher as found dead on the floor of her bedroom. Amanda and her boyfriend Raffaele Sollecito were detained and charged with Kercher's murder.

Knox maintained her innocence and spent nearly four years in prison. She was found guilty in 2014 and sentenced to 28 years in prison. The highest court in Italy, the Court of Cassation, ruled that Knox and Sollecito were innocent of the murder. She was technically convicted and acquitted twice. The Italian Supreme Court ordered the appeal trial to be re-heard after she returned to the United States. In 2015 she was definitively acquitted by the Italian Supreme Court.

She started working as a reporter for The West Seattle Herald in 2014. In February 2015 Amanda became engaged to her childhood friend Colin Sutherland. She has been featured in documentaries on CBS' 48 Hours, Dateline NBC, Lifetime, Investigation Discovery, CNN Presents, and ABC News 20/20.

Book Deal: In 2013, Amanda was paid a reported $4 million to write what became "Waiting to Be Heard: A Memoir". In an interview upon the release of the memoir, Amanda reported that the majority of her after-tax book deal earnings went towards paying down considerable legal fees incurred during the Italian saga. 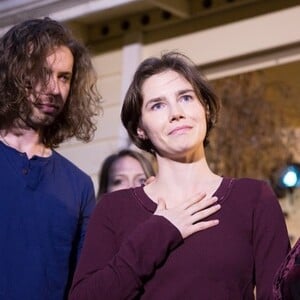