Art Linkletter Net Worth: Art Linkletter was an American radio and TV personality who has a net worth of $90 million dollars. Born Gordon Arthur Kelly in Moose Jaw, Saskatchewan, Canada, in 1912, Art Linkletter was adopted as a baby and moved to California during his teen years. He joined the Alpha Tau Omega fraternity at San Diego State University, graduating in 1934. Despite his teaching degree, Linkletter entered the radio industry and began announcing on local station KGB. Despite falsely claiming to be a U.S. citizen, Linkletter was allowed to apply for citizenship after paying a $500 fine and he became a naturalized citizen in the early '40s. He continued working in radio, hosting "People Are Funny" with John Guedel. By the mid-50s, it became a TV show that ran for seven years. Linkletter also appeared on "Life With Linkletter" and "Hollywood Talent Scouts". He acted in several movies, including "Champagne for Caesar" and "People Are Funny". He covered the live opening of Disneyland in 1955 with Bob Cummings and Ronald Reagan. Linkletter went on to guest host "The Tonight Show" for several weeks. In the early '60s, he was part of a Stan Fine cartoon "Art Linkletter's Kids". He invested in hula hoop and endorsed popular board game, The Game of Life. Linkletter was an active member of the Republican Party, part of Pepperdine University's Board of Regents, and earned a Daytime Emmy in 2003 for lifetime achievement. Linkletter holds several honorary university degrees and is the writer of the foreword for the bestseller "Release Your Brakes!" by James W. Newman. He married his wife, Lois, in San Diego a year after graduating college. Linkletter died in 2010 about six months before their 75th wedding anniversary. They had five children together and outlived three. 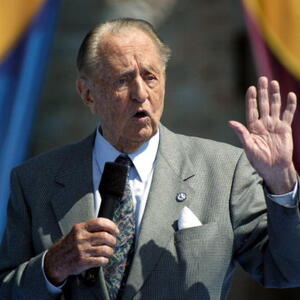