and is the star of the reality show "Toya: A Family Affair" that airs on BET. With Lil Wayne, Toya has a daughter named Reginae. Toya was born in born in New Orleans, Louisiana on October 26, 1983. Antonia is the second child in a family of six siblings. She had a rough childhood due to her mother's addiction to drugs, so she often bounced from relative to relative as she was growing up. In 2009 Toya starred on the reality show on BET called Tiny and Toya, alongside her best friend from the R& B group Xscape Tameka 'Tiny' Harris. On June 28, 2011 Toya married Mickey "Mempitz" Wright, who she started dating in April 2009. The couple had a beautiful wedding beautiful wedding in Atlanta. Some high profiles celebrities who took part in the festivities included rappers RaSheeda, Kandi, Nivea, as well as model Lauren London and singer Tamar Braxton. Mickey Wright is the Founder of HiTz Committee Entertainment, and host of the BET show The Deal. On October 23, 2010, Toya's boutique, G.A.R.B. opened on Magazine Street, in New Orleans, Louisiana, the shop sells clothes that are high quality, and affordably priced. Her business partners at the boutique are R&B Singer Kandi Burruss and rapper Rasheeda. At the shop you can buy some of Toya's pre-owned and new pieces directly from her wardrobe. Toya's reality show is about her struggles as a single Mom, launching a career and dealing with family problems such as her mother's drug addiction and her brother Walter's release from prison. 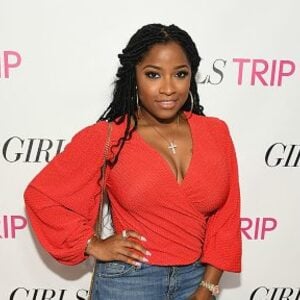