Angie Martinez net worth and salary: Angie Martinez is an American radio personality and part time rapper who has a net worth of $2 million. Angie Martinez also known as The Voice of New York has earned her net worth from her radio talk show called The Angie Martinez Show, which airs on weekday afternoons on HOT 97. She was born in Brooklyn, New York on January 9, 1971; she started her radio career at 16 answering hot lines at the urban radio station WQHT ("Hot 97"). She has appeared in several movies, videos, television and she has recorded her own albums. She has hosted several station events such as the signature VIP Lounge events, recently she hosted the V.O.N.Y. HOT 97's 4th annual Full Frontal Hip-Hop fashion show, and she even gave listeners a behind the scenes peek. She is also credited with holding the first ever event of its kind her First Annual Hair Show & Beauty Expo. As a rapper Angie was nominated for a Grammy Award for the 1998 Best Rap Performance by a Duo or Group "Not Tonight" and a BET Award in 2002 for Best Female Hip-Hop Artist. Angie was also one of the faces of Cover Girl's Queen Collection campaign in 2008. 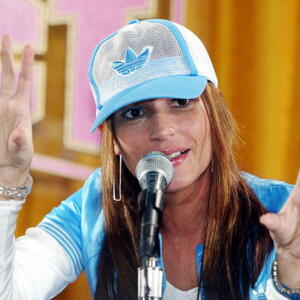