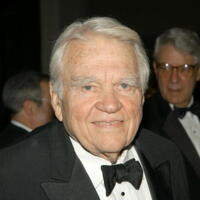 Andy Rooney Net Worth: Andy Rooney was an American radio and television writer who had a net worth of $45 million. Andy Rooney was best known for his weekly broadcast "A Few Minutes with Andy Rooney," a part of the CBS News program "60 Minutes" from 1978 to 2011. Andy Rooney was born January 14, 1919 in Albany, New York. He attended The Albany Academy and Colgate University in Hamilton, New York where he was a member of the Sigma Chi fraternity. Rooney was drafted into the United States Army in August 1941. Rooney began his career in newspapers while in the Army when, in 1942, he began writing for Stars and Stripes in London during World War II. In February 1943, flying with the Eighth Air Force, he was one of six correspondents who flew on the second American bombing raid over Germany. Later, he was one of the first American journalists to visit the Nazi concentration camps near the end of World War II, and one of the first to write about them. Rooney joined CBS in 1949, as a writer for "Arthur Godfrey's Talent Scouts". His final regular appearance on 60 Minutes aired October 2, 2011. He died one month later, on November 4, 2011, at age 92.