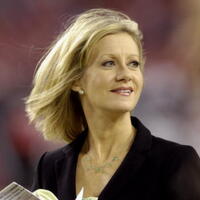 Andrea Kremer is an American television sports journalist who has a net worth of $4million. Andrea Kremer has earned her net worth as a sideline reporter for NBC on the network's coverage of Sunday Night Football and as a correspondent on HBO's "Real Sports with Bryant Gumbel." Kremer has covered more than 20 Super Bowls, the NBA Finals and All-Star Game, Major League Baseball's All-star Game and League Championship Series, college football bowl games, Stanley Cup Playoffs and Finals, NCAA Men's Basketball Tournament, U.S Olympic basketball trials and the PGA Championship. She was born in Philadelphia, Pennsylvania; she was once a performer with the Philadelphia Civic Ballet Company.