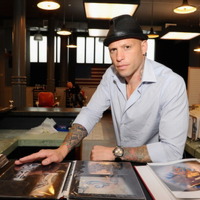 Ami James is Israeli-born tattoo artist and entrepreneur and television personality and has a net worth of $5.1 million. Ami James earned his net worth as a tattoo artist. His father, an American, converted to Judaism three years prior to moving to Israel, where he joined the Israeli army and met James' mother. James lived in both Israel and Egypt as a child, and spent much of his childhood without his father who left the family when James was four years old. He moved to the United States aged 11 or 12, living with his father's parents before moving to Miami at the age of 12. He moved back to Israel in his teens and completed his military service in the Israel Defense Force as a sniper. At the age of 15 he got his first tattoo, an experience which made him determined to become a tattoo artist himself. He started tattooing from his home. But it did not take long before Ami became an apprentice. In 1992, he started his apprenticeship with tattoo artist Lou at Tattoos By Lou. He is best known as the co-owner of the tattoo shop "Miami Ink" from the TLC series of the same name. He is the co-owner of the Miami Beach, Florida tattoo parlor, Love Hate Tattoos. He also co-owns the DeVille clothing company with Nunez and Jesse Fleet, and the Miami nightclub Love Hate Lounge, with Nunez and two other close friends. He has also created designs for Motorola's RAZR V3 mobile phones. He has also recently invested in a jewelry line, Love Hate Choppers Jewelry, with Boston jeweler Larry Weymouth. Diagnosed with ADD, James explains that he was drawn into art and tattooing from a young age as his father had tattoos and was also a painter. Ami James was born on April 6, 1972 in Israel.